Pink as in Progress 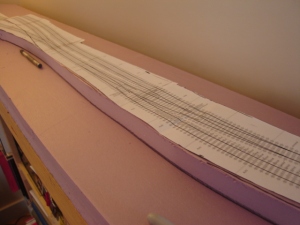 They say a man can only push N scale trains around on a sheet of cardboard for so long. Right? Just in case they do, I figured I’d better prepare a response and this morning I’ve been fooling around with just that. The cardboard has been removed from the benchwork and in its place what feels like quite a lot of pink styrofoam.

My personal, emotional, scope for this project lists ditching and drainage as two things I’d like to represent on this layout. I’ve never really made much progress here on any previous layout but both are such an obvious feature on the prototype. To do this, I reasoned, I’d need a lot of freedom along each side of the track. Rather than lay everything down and then dig it all out later I thought I’d try something different, for me at least:

The first point is out of the way now. I’ve laid down two complete layers of foam to provide a base on which to develop the scene. A third layer was carved to follow the edge of my track, based on the plan I drew. I’ll glue this layer down and then the plan to its top. I can then shape the edge to form the edge of the roadbed.

I’d like to treat the roadbed as an element separate from the surrounding scenery. Though I’m doing this with foam it doesn’t feel too different from a spline style of construction with parts built up from layers of plywood. Just as with that method, once I’m satisfied that the track is in place and working correctly I can fill in the void areas around it with blocks of foam to build up the scenic areas. To me, separating these two elements completely feels like I can focus design decisions regarding each on the needs of each activity and I think both will benefit from this approach.