In many ways, this is the view that excited me the most when I first started exploring this presentation style. Even as presented, I feel the border surrounding the boxcar could frame it more closely. 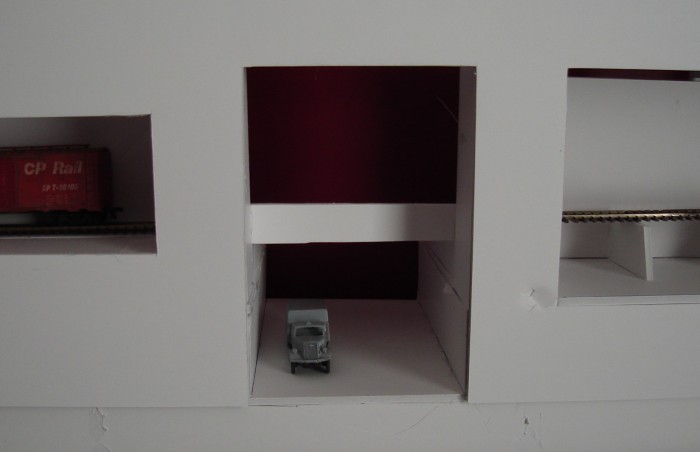 Moving from left to right, the next scene is the view down the street. The track passes overhead, jutting out from one building before disappearing behind another. The bridge is really only inset just over an inch inside the face of the scene but it feels so much deeper. In addition to playing with the orientation of each viewing window, I believe we can play with the overall height and relative position.

In terms of colour and texture, I’d like the fascia to be treated in a muted tone not unlike older concrete. Colours very close to this should be used for the street and sidewalk, as well as the bridge sides. In this way, this scene is presented in an almost monochromatic manner that relies on form and shadow to describe the scene. Exceptions to this could apply to the inset building walls that line the sides of this scene. Perhaps two bands of lovely aged brick walls?

In my mockup and also in my vision for this scene, the bridge’s deck does not reach all the way to the back of the scene or touch the backdrop. This slim opening at the back of the scene might invite some overhead lighting to reach around behind the bridge and bounce of the street below. Though I didn’t include the form of buildings on this other side of the tracks they shouldn’t be rendered with the same level of detail as the foreground ones. Their mass and colour is their purpose and they should not detract from the detail and focus that is ultimately at the bridge area in the exact center of the layout and this scene in all planes. 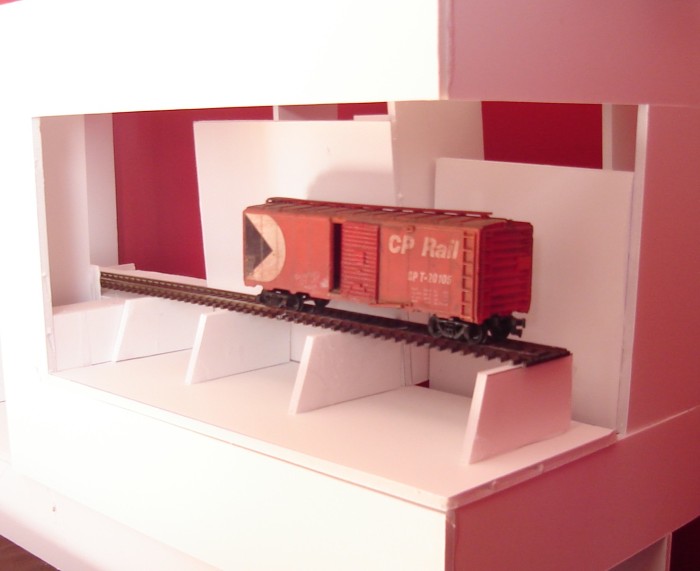 I love the idea of these urban coal trestles that were placed beside warehouses so that a boxcar could be unloaded into the warehouse or a hopper could be emptied into coal piles below. The coal trestle provides a chance for lots of black-grey coal dust. Little hints of stubborn vegetation peek in from the seams around the edge and perhaps even from between the ties. If possible, the detail could array back from the front of the scene to a median resolution at the track’s centreline, and fading as we move back through the scene.

The mockup is constructed of foamcore and is thirty inches in length. It is eight inches deep and I believe about twelve inches high. The stepping in the fascia is not intentional. I envision this plane to be a constant and regret that my stock of foamcore sheet didn’t provide a panel large enough to present it as I saw it being. As I mentioned in the original presentation of this idea, this is a layout I do not intend to build. That said, I had a lot of fun constructing the mockup and am excited to see my idea as a massing model. It’s fun to explore around it and test how each scene works.

I love the way the boxcar is framed in the first scene. I’d like the opening to frame the boxcar and to use that car to identify the railroad. This identity is both the railroad company and also a clue on the era and perhaps even the climate.

When I look at the layout, my attention and imagination are so drawn to the forms at the bridge scene. It feels like a classic, almost science fiction-like, view of the new urban place. Layers of transportation stacked over each over and threaded through one another. A quilt composed as much of panels of commerce as action.

That leaves only the coal yard. It’s the least expressive of the three scenes yet it depicts something that I just like and find appealing. It’s probably just me and my imagination, but even across this short distance, I feel like I’ve travelled much further on this trip, having followed the train past street-level warehouse and manufacturing lofts, breaking the silence of a busy midday street, until eventually arriving to deliver that single car at the end of the line.

Categories: How I think