Home › How I think › The Matchbox 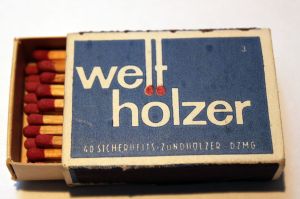 Image from Anagoria and found in Wikipedia and used under Creative Commons.

Closed, the matchbox is a advertisement for a brand. It’s entire surface area is dedicated to that statement. We know that there are matches inside and we don’t need to see them to trust that they’re there waiting for us to use. I like this simplicity and have always thought the simple matchbox was among the more brilliant ideas we’ve presented as a means of packaging a product.

A model railway exists in two states: One where it’s a static diorama and tells a story by presentation of details alone and a second state where it comes alive as a piece of kinetic sculpture. How can its design favour the very different design criteria to better serve those very different demands, basically: That shelf isn’t going to get longer just because I need more track to run a train on.

Or could it? Presented above are a pair of pages I’ve taken from my sketchbook based on an idea that I’ve been thinking about, based on a classic matchbox.

The “scene” is the identify of the layout. In between uses, the entire available area is made available to casting the scene in which the railway is set. To create enough space for the scene I have truncated the plan just in front of the turnout. This isn’t a problem since, in this state, our ideal is presentation and not operation. 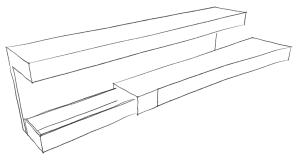 When it is time to use the model railway to support operation, the scene slides to reveal a tray that resides under the layout itself. That tray can be used to store extra rolling stock pre-loaded onto storage cassettes. Those cassettes could be added as a bridge over top of the tray that connects to the track on the layout to add to the available length of track in the scene and provide enough room for a train to reach into either of the sidings.

In truth, this isn’t an entirely revolutionary idea. Removable storage cassettes that clip onto the end of the scene feel as established an idea as the hobby of model railways itself. Their traditional design in fact would be simpler to engineer than what I’m presenting so what makes this idea intriguing to me?

We could divide the available room to provide a staging area aside the scenic section. However, we’re taking space we need simply to invest it for storing stuff we’re not using. Further, to the audience, I’m worried that we wind up telling both stories in the same voice. I think that can prove visually confusing.

By hiding the extra rolling stock within the layout’s envelope I don’t need more room than the layout occupies simply to store the cars. Also, they’re afforded a bit more protection from the world buried deep inside compared to being on a shelf mounted on the wall or in their factory boxes stored somewhere else.

This storage space itself could and should store more than just the trains. I’d place the layout’s control system in here and even the basic modelling tools required for typical modelmaking. I could easily see enough room in this hidden space for some knives, sanding sticks, tweezers, and the usual kit.

In this plan the backdrop and lighting valance are static. They don’t move with the layout. This too is deliberate. When I’m operating a train on it my attention is on dividing cars between the various car spots indicated on the plan A-B-C-D-E but likely where I need light so I can see to couple and uncouple cars or read data from a car’s side I’m standing, fairly stationary, around F-D-E.

The local art store sells wooden trays intended to be used for painting in the same way we’d use a stretched canvas. I could see two of those, face each other to form the top and bottom halves of the layout with a set of simple drawer slides acting as the means of moving the layout for operation. (These trays come in sizes up to 12×48″).

I don’t know if this is an idea that I’ll tease out much further but it is something that I’ll refer back to. In a few weeks, we finally move into our apartment and it’ll be time to start seriously exploring some exciting new venues for the layout to live in. Having posts like this on hand will be fun to refer back to.

Categories: How I think, My Favourite Prince Street