Five years ago Eric, Steve, and I were discussing train pictures and I remember remarking how they could be passed across a table and without me saying a word, they’d be my introduction. From that conversation a photo series blossomed and it spread to friends who were kind enough to share five more photos on their blogs. This project is among the things I am absolutely the most proud of and so grateful for. Five years have passed since those posts and today, it’s February 5th. Yup, 2/5 or 5/2. Close enough. Let’s try this again to see what’s happened since the last time. Start the music. Roll the tape. It’s the My Railfan Five, the second edition. Same basic idea: five train photos from my camera; the only new rule being that they have to be from the last five years.

“When Eric and I first started emailing back and forth about this challenge I remember thinking about just how hard it was going to be to narrow down to just five photos. Luckily, I’m a lousy photographer. Armed with that self-awareness, I don’t tend to take many photos so at least I’m not choosing from as many as I could be. So, given that excuse, here are my five”

Five years ago I didn’t have a cell phone and wasn’t living ten minutes from a favourite section of railroading. Picking only five has not been easy. In no order, let’s begin.

“You have plans tonight?”

That night in December 2018 when I received a text from a friend that teased simply: “You have plans tonight?” Over on CP their holiday train was moving across the country but something a little more personal was brewing in Moncton as 408’s crew began stringing Christmas lights along 408’s leader for the run to Darmouth that night. This was not official CN stuff so… Around 11PM I grabbed a coffee and piled into the car and headed to Truro. I hoped to get into town before 408 but they were already there, their switching completed, and they were waiting to head onto the main and for the last leg of their trip east. I watched them picking up speed as they passed Truro station. Back into the car and I paced the train out of town. I was able to get ahead of them by Brookfield but the most amazing moment of the night happened at Stewiacke where the track is right at the road’s edge and we paced each other, at speed. The wake of snow dusting up behind the engines lit by the Christmas lights was spectacular and impossible to describe. I met up with my friends in Burnside where we watched 408 working the small yard there and took turns grabbing photos. Was it around 2 or 3AM that we finally got into downtown Dartmouth to watch the end of their shift. This evening was a real gift of Christmas. Thank you 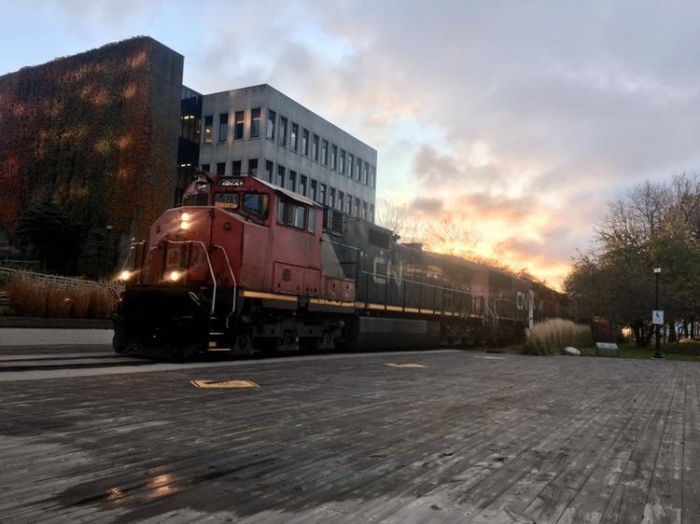 It was a beautiful morning walking along Halifax harbour into work. As I neared Alderney Landing I could see headlights approaching and then watched as 408’s light (engines only) power roll up and stop outside the Tim’s. A crew member dropped down out of cab and into Tim’s for coffee. “Was I really seeing this?” “Yup” Tray of coffee in hand and they’re back up into the cab and heading back into the yard to tie down the power. I thought of those stories you’d read and about the first time my father-in-law let me borrow his truck for an errand and how cool it felt to do something like this. 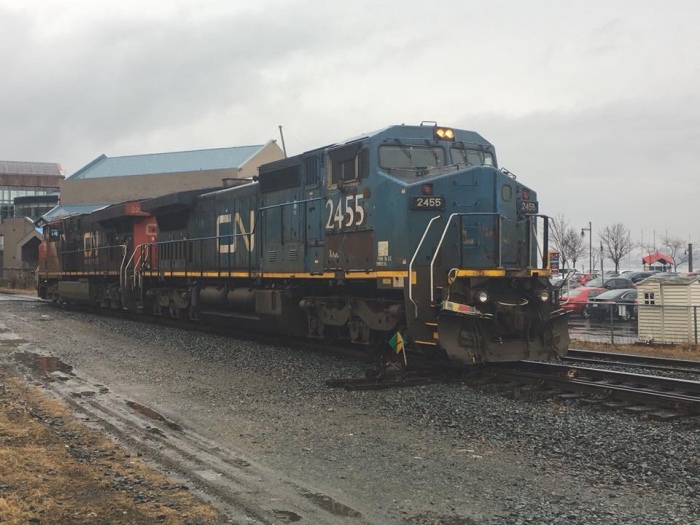 February 2018 and I timed my coffee break to drop down trackside to photograph 511’s return to Dartmouth yard and photograph IC 2455. I’d been receiving some wonderful teasing about my “coffee break” posts from good friends and, when I posted this photo online I commented: “Back from coffee just in time to watch 511’s power arrive.”

Down in the comments on that post is this, that I still think is one of the funniest things and it still makes me smile and laugh: “Back from delivering 54 loads to Wright’s Cove just in time to watch Chris Mears arrive in Dartmouth.”

Thanks Michael. 100% solid gold material and I still laugh at that.

Taylor, Steve, and I are on a road trip to see trains “on the mainland”. We tried catching (was it 408 or 407) near Oxford and doubled back into Moncton. We’re at Gordon Yard here. 5476 was the first SD60 I had ever seen and it’s working here as the Moncton yard engine. This was one of those amazing spontaneous trips that never seem to happen often enough (that’s my fault) but I will always look back on this day fondly. You guys are really great friends and I’m grateful for your friendship constantly. I think about this wonderful trip now when I’m back in Moncton, chasing trains, every time.

I didn’t set out to only pick photos from November or December but somehow that’s just how this worked out. It’s been so hard to settle on only five photos for this series but this one was one I knew, from the start, I would include here. We’re in Atlanta. We’re here for work but had a day to explore and we have done that. We have walked across the city and back and, filled with amazing food and great experiences, we’ll soon be boarding a MARTA train back to our hotel downtown. Atlanta wasn’t a place I ever imagined visiting but I’m ever so glad we did and I’d really like to go back, someday. In a way, that’s life, discovering now favourite moments inside experiences that you never thought you’d get to live. I was here because of Krista. I am still here because of her. I always say it because it’s true: “It’s all her”

I’m going to push my luck since it needs to happen. Picking five has been extremely difficult and I can’t close this post without adding in these. I’m going to add two photos and hope I’ll be forgiven by trying excuse this behaviour with a silly reason “Hey, we chose February because it’s month number two so adding two more photos keeps that alliteration alive”

Often my friend Darren and I exchange texts along the lines of “Have you seen 505 this morning?” A couple weeks ago he texted me to let me know 505 was on its way into Dartmouth and he was chasing it. We’d had quite a bit of snow the day before so it would be nice to catch the train in the snow. I took a quick break and headed down to the yard to meet up with him. Thinking I’d only be outside for a little I just left my sweater on but didn’t wear my coat. We waited and waited and no train. Damn, it was cold. Away from my desk anyway, I stopped for coffee and on the way back caught the train passing under the pedestrian overpass. Later that day, another text from Darren that 505’s afternoon trip was passing Woodside and I scurried over to King Street to catch them crossing the canal. It always seems this hobby is about the trains but that’s not true. It’s about the people, the trains are just part of the context.

Prince Street is now in its eleventh year. Doing this My Railfan Five seems like a really appropriate way to mark this anniversary and the time spent in the middle.

Check out Steve’s post from the original series. I’m so glad we’re doing this again: https://blog.traingeek.ca/2014/10/my-railfan-five-challenge.html

My original five are here: My Railfan Five

I have a series of links over on the right to some of the other blogs that we shared this experience with last time. Some friends of mine have been kind enough to play along again this go ’round. They shoot some amazing photos and they’re truly fantastic people and I’m looking forward to seeing what they come up with. So, Eric and Steve, it’s your turn.